A computer uses software in the form of binary numbers controlling millions of logic gates to perform a task.

Due to the difficulty in reading large binary numbers, other systems such as Octal (Base 8) and Hexadecimal (Base 16) are used. Hex is often used to display numbers in a human-readable form. Converting binary to hex saves space and makes the number easier to understand or less likely to be entered incorrectly. Hex can be identified by the 0 to F numerals it uses. Often it will be prefixed by a "$", such as $A4.

Most numbers will be decimal values and there will be no indication of their base. The preferred method of writing Hexadecimal is the "$" prefix.

This is an advanced topic. It is presented to provide additional background information. 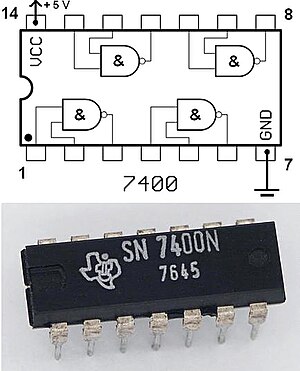 Deep inside the computer is an Arithmetic and Logic Unit (ALU). This is the brain of the outfit: it handles all of the thinking of the computer.

The ALU does its thinking using binary numbers. The computer does arithmetic while counting on its fingers. Of course, binary numbering is for people with only 2 fingers. (There are only 10 kinds of people in the world: Those who understand Binary, and those who don't.)

Since a computer is digital and only understands two states (low/high), it does all its operations based on these states and their combinations. It can only add, but by using logical operations, it can do various calculations.

Binary numbers make as much sense to a computer as decimal (base 10) numbers do to us. A microprocessor is a large collection of very simple logic circuits that work with Boolean Algebra.

The functions are as follows:

Implementing logic is easy, and by using various combinations of binary numbers, things can be made to happen. These logic gates can have more than 2 inputs, which will determine the resulting output depending on the logic function. For example, four inputs to an AND gate could be used to check if four devices (like door switches) are positioned correctly. A light, or another function, cannot become active until all the input conditions are met, such as the gates being in place on a large machine before the operator can start the process.

Another example would be a switch with a signal protecting it. If the switch is thrown, the signal is red. If in its normal state, green. Should a facing switch further down the main line be thrown, the signal is orange instead of green. A thrown switch which does not face the direction of travel will cause the signal to go red. This is easily done with simple logic gates. A simple program can also do this, and more.

Electrically, voltages represent binary values, when the signal is On or High, it is a 1, and when Off (low), a zero. These are often referred to a logic level signals, which have two states where ON is 5V, and OFF is zero. Logic gates are designed to accept a voltage above a certain level, such as 3.5V, as High, and those below 3V for example, as a Low value. The same can be done using pneumatics in an area where electrical signals present an explosion risk.

A bit is the smallest piece of information a computer can deal with. A bit can be on or off. Consider your flashlight. It is a binary device -- it is ON or OFF. It's that simple!

In more technical terms, a bit (binary digit) refers to a digit in the binary numeral system, which consists of base 2 digits, that is, there are only 2 possible values: 0 (Off/Low) or 1 (On/High).

A nibble is four bits. Or half a byte.

Well, a bit is nifty and all that, but it doesn't do much or represent very much by itself. It can't count or can't keep track of multiple pieces of information. So we need to complicate things.

A byte is simply a group of 8 bits in a row. Or, think of it as 8 flashlights, all lined up. Each flashlight can be on or off. If you try, you can list all of the possible permutations:

Well, probably not so surprising, the combinations shown above are in order. And they represent numbers, too!

Notice (you can take my word for it for the time being) that although there are 256 possible combinations, we use one of those combinations as zero, so the possible numbers represented by a byte are 0 thru 255.

This is why some computer-based equipment numbers things starting with 0! This means, of course, that you have to make a mental adjustment-- you start counting with 0, not 1. You can also think of this as starting at 0, then the numbers represent the steps you have taken down a path -- 1, 2, 3, etc.

All you have to do is memorize the complete table, and you've mastered Binary Numbering!

Well, you can. But that's probably the hard way! (;

Let's examine the numbers we're most familiar with: Decimal Numbers.

We have a number of columns, and each column represents a "power of 10."

In the first line, we have 1 in the "thousands" column, 1 in the "tens" column, and 1 in the "ones" column. We add them together to get "One thousand eleven."

In the 2nd line again, we could say we have

Notice I've only selected examples using 0 and 1 in each column. This is because once we get to Binary Arithmetic we won't need any other numerals!

Always remember-- in most cases you DO NOT have to translate back and forth between Binary and Decimal!

Of course, you should know how to convert back and forth-- it's what makes CVs in your DCC decoder so much -=FUN!=-

Just as in the Decimal world, we have columns, and each column represents a "power of 2."

Binary addition is just like addition in Decimal, except you have to carry awfully soon! Since we can only have 0 or 1 in a position, if we attempt to add binary 1 + 1, we don't get two, we get 10!

Whooo, boy! What fun! I had to do that a couple of times, then translate to decimal and verify my answer:

Addition and multiplication with logic gates is easy. Subtraction and division are not. Doing operations other than addition with a microprocessor is not easy. They can only add two binary numbers together. For multiplication, the same operation of addition is performed a number of times. for example, 4 × 3 = 4 + 4 + 4. For division, the subtract operation is repeated the appropriate number of times.

To subtract, the Ones' Complement method is used. Since this is an advanced topic, it will not be discussed. Following the link to the Wikipedia article will explain the process. The sign of a binary number is indicated by the first binary digit being a "1". For example, 1111 1111 could be either decimal 255 or −0, its Ones' Complement value.

The simple answer is: A computer subtracts by adding two numbers together, where one number is a Ones' Complement.

Well, it's nice to know that the value for your CV is 11010011, but that's a lot to remember! So there are ways to make the memorization easier.

First, lets divide a byte into two nibbles. *sigh* Yes, it's geeky. So our number 11010011 is written 1101 0011. We can represent these two nibbles as two numbers or letters using hexadecimal notation.

The following table shows each hexadecimal digit along with the equivalent decimal value and four-digit binary sequence:

To convert a hexadecimal number into its binary equivalent, simply substitute the corresponding binary digits:

To convert a binary number into its hexadecimal equivalent, divide it into groups of four bits. If the number of bits isn't a multiple of four, simply insert extra 0 bits at the left (called padding). For example: