Help: How to use tables

Tables can be useful for a variety of content presentation on DCCWiki. Traditional HTML table markup is often difficult to edit, especially for newcomers. It has been replaced by a simplified wiki syntax.

For details on how to create tables on DCCWiki, see Working with tables .

Another method of working with tables is to use Neo Office. From the website:

NeoOffice is a full-featured set of office applications for Mac OS X. Created in 2003 when there was no Mac OS X version of OpenOffice.org available, Patrick Luby and Ed Peterlin have devoted their decades of Mac software engineering experience to create an office suite that is adapted to the unique needs of Mac users.

NeoOffice has the ability to export a file in mediawiki format. You can create, format and edit a table just as you would with a word processor, save it, then export it in the mediawiki format.

The result can be opened with a text editor, the content selected and pasted into the DCC Wiki. Instantly, a beautiful table.

There are free and paid versions available for download at the NeoOffice Home page.

There is an online table generator which can create tables in several formats, as well as offering a number of options when creating a table. The result can be copied and pasted as needed.

When tables are appropriate

Tables are perfect for organizing any information that is best presented in a row-and-column format. This might include:

Many times, a list is best left as a list. Some articles include very long lists which might be difficult to edit if they were in table form. Before you format a list in table form, consider whether the information will be more clearly conveyed by virtue of having rows and columns. If so, then a table is probably a good choice. If there is no obvious benefit to having rows and columns, then a table is probably not the best choice.

Tables shouldn't be used simply for layout, either. If the information you're editing isn't tabular in nature, it probably doesn't belong in a table. Try not to use tables for putting a caption under a photograph, arranging a group of links, or other strictly visual features. It makes the article harder to edit for other DCCWikipedians, and isn't really what tables were designed to do.

When tables are inappropriate

If a list is quite long, or is relatively simple, use one of the standard DCCWiki list formats. Long lists can be hard to maintain if they are inside a table, and simple lists do not need the row-and-column format that a table provides. Here are some examples of things that might be better done with lists instead of tables. An exception to this may be if the table would be an ideal candidate for having either column be sortable (see sorting tables below).

Table formatting (Don't do this)

Without tables (Do this instead)

Many times, images in an article are placed using a quirk of table rendering. Because a table can be floated to the left or right side of the screen, it has become common practice to utilize a simple one-celled table to place an image in a particular part of the screen. This was a necessary workaround for old browsers, since it generates a consistent rendering of images in browsers which do not adequately support Cascading Style Sheets (CSS). By far, the majority of browsers in use today, however, should do just fine with style sheets. The recommended practice now is to arrange images using an element called div.

For detailed instructions, see Help:Image use policy and the Help:Picture tutorial. Here's a brief example, though:

Table formatting (Don't do this)

Without tables (Do this instead)

In both of these cases, the result is essentially the same; the image is floated to the right-hand side of the screen, and the surrounding text wraps around it. Here is what it looks like in your browser (with text added): 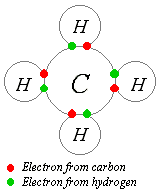 Covalent bonding is a form of chemical bonding characterized by the sharing of one or more pairs of electrons between atoms, in order to produce a mutual attraction, which holds the resultant molecule together. Atoms tend to share electrons in such a way that their outer electron shells are filled. Such bonds are always stronger than the intermolecular hydrogen bond and similar in strength to or stronger than the ionic bond.

Covalent bonding tends to be stronger than other types of bonding, such as ionic bonding. Unlike ionic bonds, where ions are held together by a non-directional coulombic attraction, covalent bonds are highly directional. As a result, covalently bonded molecules tend to form in a relatively small number of characteristic shapes, exhibiting specific bonding angles.

Tables may cause other difficulties, even when used appropriately. Here are some issues you may want to consider if you use tables in your articles: