Simplex is the simplest method of communication technology. Your car radio is a good example, as it only receives a signal, it cannot transmit.

Some throttles are simplex in nature, in that they can send signals to the layout, but cannot get feedback from the layout. Often, they have to be physically connected to the throttle bus in order to do certain things, like select or dispatch a locomotive. Many throttles will have a cable which will allow the connection to be made. They can function fully tethered, or in wireless mode.

A full duplex device allows both functions to occur at the same time. Such as a telephone. It has both receive and transmit sections that do not share components. Duplex throttles often have all the features of a tethered throttle, without the need to be tethered (physically connected) at times.

This is a slightly more complex method than simplex, where the handheld or desktop device can transmit or receive, but not at the same time. Such as the press-to-talk button on a portable radio. The button simply reconfigures the circuitry from listen to talk mode. Much like a tape recorder that has a single record/play head, and a number of components are shared between both functions, so they cannot do both at once.

The advantage of radio based wireless systems is you often only need one receiver or receiver/transmitter (transceiver) to get acceptable results. Some also incorporate IR capabilities. 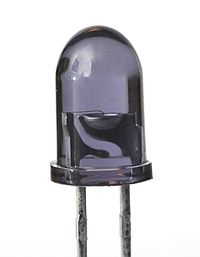 Infra-red or IR is a method of communication using light instead of radio waves. It is part of the spectrum just below visible light (the low end is red), ranging from 300 Gigahertz to 430 Terahertz. For comparison, microwaves are 300MHz to 300GHz. Infrared is felt as heat in sunlight. Ultraviolet, the radiation that gives you a suntan, is from 790THz and up. It is above the visible spectrum. Radio waves are found below 300GHz.

IR is used for remote controls for televisions, Blu-ray players and other electronic devices. It is a simple technology to implement, but it has disadvantages. It can be very directional, with limited range. It does not pass through walls or other barriers. Fluorescent lighting can throw off enough infrared noise to interfere with remote controls, and the sun radiates so much IR it will swamp a receiver.

Some throttles have an IR feature, which may be simplex or duplex. IR Receivers are needed, and must be placed so they can see the IR signals from the throttle. Unlike radio systems you will probably need multiple receivers for satisfactory operation. Many operators place a few of their IR receivers high up in the layout room to minimize signal disruptions caused by something blocking the transmitter's path to the receiver. Same concept as your TV, where you might have to hold the remote in a certain way to get a clear path to the TV.

While it is possible to operate using IR in Duplex mode, it is rarely implemented due to additional complications.

With radio-based throttles, many of them share the same spectrum as other devices in what is known as the ISM Band (Industrial, Scientific, Medical). Devices such as cordless phones, baby monitors, microwave ovens and WIFI networks also occupy this band. Low power devices, which meet certain technical requirements, are permitted to use this band, and may interfere with other devices nearby. Other sources of interference include nearby radio transmitters, such as amateur and CB radio. New Internet-of-Things devices also use this spectrum, and it is possible that some IoT devices may also operate on the 916.5MHz channel used by NCE throttles and Digitrax's older Simplex mode throttles.

Another source of interference is wireless throttles from another manufacturer. This is often seen during train shows with layouts using wireless DCC systems from a variety of manufacturers, which will sometimes cause problems by being on the same or a nearby frequency. The same way pushing PLAY on the VCR remote caused the TV to mute or the cable box to change channel. The device received a command not meant for it, but which it understood (incorrectly). Or it will just cause enough interference, and be powerful enough to render a nearby layout useless while feeling no ill effects from other wireless systems around it. It is also possible that the offending transmitter has a wider channel that spills over onto other channels in use. There is not much that can be done other than aligning antennas and physically separating the offenders to reduce the chances of interference occurring.

Some WiFi base stations allow you to define the channels being used to reduce or eliminate conflicts with other devices. This can also help with things like smartphones or other WIFI devices being used as throttles.

The capture effect is defined as the complete suppression of the weaker signal at the receiver's limiter (if present) where the weaker signal is not amplified, but attenuated. When both signals are nearly equal in strength or are fading independently, the receiver may rapidly switch from one to another and exhibit flutter.

The capture effect can occur at the signal limiter, or in the demodulation stage for circuits that do not require a signal limiter. Some types of radio receiver circuits have a stronger capture effect than others. The measurement of how well a receiver rejects a second signal on the same frequency is called its capture ratio. It is measured as the lowest ratio of the power of two signals that will result in the suppression of the weaker signal.

This phenomenon is often seen on FM Radio, where the stronger signal will be captured at the expense of the weaker signal. This allowed FM stations to operate on the same channel in much closer proximity to each other without causing inference, unlike that experienced by AM radio stations.

Radio Frequency Interference (RFI) can originate from many sources. Switching power supplies can introduce harmonics by their operation, which can radiate from an unshielded power supply, or via the house wiring which acts as an antenna. This noise can also pass-through other power supplies to directly influence the device connected to it.

One recent source is LED light bulbs and dimmers. The power supply for the LEDs can emit RFI in the range used by the ISM band, causing with reception issues with wireless throttles. The solution is to replace the bulb, often a low-cost device, with a higher quality one. The cause is the internal power supply using Pulse Width Modulation to control the intensity of the light.

Dimmers used with LED fixtures can also radiate interference, and the solution is again: Replacement. The changing of electronic devices such as this should be done by a qualified electrician, for your safety.

The 2.4 GHz band used by WIFI has 14 channels allotted. Some channels may not be available due to regulatory requirements.

The 14 channels overlap each other. In an environment where a number of WIFI enabled devices are present, there will be competition for available channels. Usually not an issue at home, but at an exhibition open to the public, operation can be erratic as the throttles compete with cell phones and other devices for access to the spectrum.

Cell phones are in a class all their own. While they do operate on the 850MHz band, they also possess WIFI and Bluetooth capabilities

Spectrum costs a lot of money, and with increased usage comes the demand for more spectrum. Rather than spend a lot of money to buy more access, the cell phone providers have begun shifting some of the load to the ISM band. This has the potential to drown out any other signals using that band.

For home use this will not be an issue, as LAA stations will be found at locations with large numbers of data users, such as an arena or a mall. It is something to keep in mind when planning to use wireless throttles at an exhibition.

Consider that a cellphone may transmit at power levels up to 3 Watts. The radios used in DCC Throttle may only be capable of 350µW. A cellphone can and will swamp their receivers and transmitters due to the difference in magnitude of their signals compared to your DCC Throttle.

Wi-Fi HaLow (hey-low) is a new application of the 900MHz spectrum, an amendment to IEEE 802.11-2007, for use by Internet-of-Things (IoT) and other services where speed is not important. It also offers wider Wi-Fi coverage and a stronger signal, with greater data rates than Bluetooth offers. One potential application is smart metering by utilities.

Applications include rural communications and offloading of cell tower traffic. It has a range of one kilometer.

Unfortunately, Bluetooth not only uses the ISM band, it also occupies the same part of the spectrum that WIFI uses. To make it worse, most Bluetooth transmitters are much higher in power than your typical wireless throttle.

In large venues with many people present, carrying their cell phones which are constantly transmitting, this additional interference can easily drown out the throttles. The receiver will capture Bluetooth signals intermittently, which is enough to corrupt data transmissions or block them entirely.

If this is an issue at an operating session, asking the participants to turn off their WIFI and Bluetooth by switching their device to Airplane Mode.

There are also issues related to reception, both by the base stations and the throttles. Walls, especially concrete, or those with metal studs can attenuate the RF energy passing through them. Positioning and alignment of receivers/transmitters can also be an issue, but with experimentation can often be mitigated. Sometimes adding additional base stations can improve operations. Even the position of the operator(s) can have some influence. Water attenuates high frequency radio signals, and humans are very effective attenuators.

Infrared (IR) uses light, so anything that blocks light is an issue. Mounting receivers in the ceiling helps, as does positioning them with the least amount of obstruction between them and the transmitter. Again, additional receivers can solve some issues while increasing reliability.

This measurement is used to represent power, with 0 dBm defined as 1 milliWatt. For larger signals, dBW is used, referenced to 1W. Small signals are represented using negative numbers, for example, −95 dBm.

There are some basic rules when using deciBels:

DeciBels are logarithmic in nature, not linear. A 20dB difference in power is not 20 times, it is 100 times more. A small increase in power or attenuation can have a large impact as a result.

As shown in the table above, a wall constructed of drywall will have an impact of 3dB, or the signal on the other side will be halved by it. The same applies to a window. and the concrete block wall is slightly worse. A brick wall will have much more attenuation, because of the solid structure of the brick compared to the blocks.

The metal door is 6dB, which is half of a half, or one quarter. Signal strength will be a quarter on the other side of it.

In case you are wondering. the Bel is named for Alexander Graham Bell.

For RF, the calculations are for power, where +3dB is a doubling of power. In audio, the doubling of amplitude (or volume) is +6dB.

A number of throttles are available on the market which use IR, radio, or WIFI technologies for communications.

IR sensors are used for occupancy detection. A receiver/transmitter pair are mounted in gauge, and sense of a train passing over them by the presence or absence of a reflected signal. Another technique is similar to the "electric eye", where breaking the beam indicates the presence of a train.